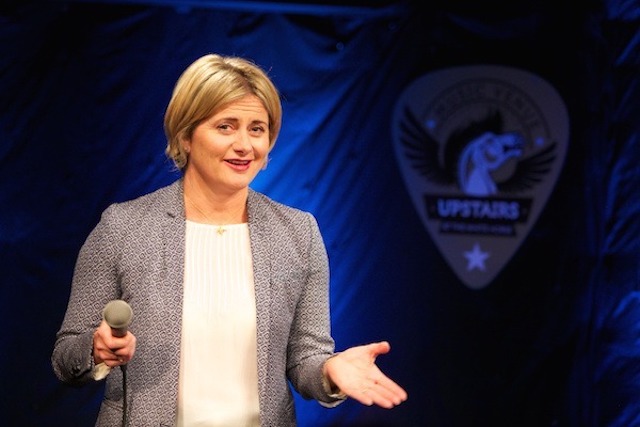 This summer we lost a very special person.

Veronica Kenneally was a vibrant presence in Smarter Egg Peer Circles and Offsites over the past five years or so. In the safe environment where open conversations are possible, she had a significant impact on dozens of colleagues.

Veronica was born with superpowers, which came to light a few years back when melanoma developed to a life-threatening level. Faced with impending doom, and discouraging news, she got to work. She challenged the prognoses and direction given, she doubled down on the activities that gave her the best physical and mental health and she sought to align how she spent her time with the things that meant most to her.

By tapping into the courage that was within her all along, she fought the disease that would eventually take her life and she wrestled it into submission, buying priceless years to spend with her young family and to make progress on her business projects.

If you haven’t spent time with Veronica, you might think that I’m overdoing the praise just because I’ve lost a valued friend. Those who’ve worked with her will possibly suggest I’m under-doing it.

You can see for yourself, and I’d actually encourage you to do so.

Exhibit A – Veronica at The White Horse

This talk is a masterclass in persistence, sharing her experiences of setting up her successful Veronica’s Snacks business.

What no one else knew that night in a packed White Horse was that Veronica had just traveled from a cancer treatment in Dublin. She was due on stage ten minutes earlier than her eventual arrival, and as I stood at the back of the venue, worriedly checking the latest text messages, she came in, took a deep breath and took to the stage. This was what she said.

When Veronica began to respond positively to new treatments, she started to share her cancer story more widely. I had the privilege of a front row seat on multiple occasions as she inspired many others, and she herself drew courage from their reactions.

Rather than hiding, Veronica dug deep, tapped into her bravery and began to craft her experiences into a message that others found to be uplifting and motivating. Which resulted in…

Exhibit B – Be Bold

This was Veronica’s final project, and one for which we had great plans. Alas, her illness re-emerged recently and denied her the opportunity to reach more people.

I’d love it if you spent some time on Be Bold and read a little more about Veronica, and think about the messages she felt were important for us.

Here’s the thing: we too have many of her superpowers but most of the time we’re either too scared or too distracted to access them. We often underestimate the power of our choices.

We can craft a better life for ourselves. Being bolder is a good place to start.