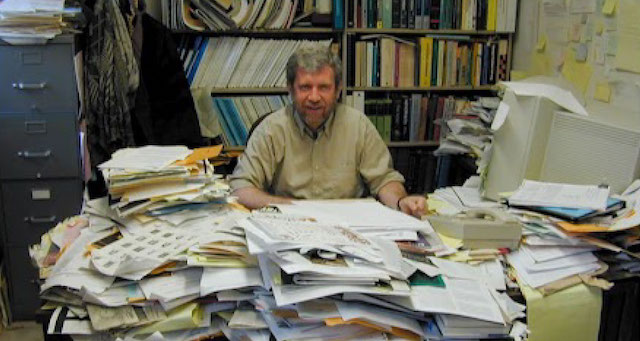 Anders Ericsson – apparently not inclined to practice tidying his desk

Maybe it has something to do with the name of my business but over the years I’ve had quite a few people get in touch looking for help with “working smarter, not harder”.

After a while I began to notice a trend. Those who were more focused on the ‘working smarter’ piece of the puzzle tended to make progress more readily. But those who fixated on the ‘not harder’ element tended to get bogged down.

Perhaps it’s due to the inherent delusion in expecting greater rewards for less effort. Perhaps it’s related to a more ingrained habit of avoiding the reality that needs to be examined.

As a species, we’re suckers for shortcuts. Give us a catchy, reality-compressing slogan and we’re ready to jump off a cliff.

For us as professionals though, much of the pursuit of ‘hacks’ is a distraction. Our path to progress and mastery needs to travel through the essential experiences of full engagement and the uncomfortable expansion of our capability.

Renowned psychologist Anders Ericsson passed away this week. His research on performance has been popularised via the contentious 10,000 hours concept, spreading like wildfire after Malcolm Gladwell’s Outliers was published.

His greatest legacy may be the attention he has brought to the idea of deliberate practice – the systematic approach to improving a specific set of skills, including a greater focus on feedback and external guidance. Deliberate practice is in contrast to what he called naive practice, which is what most of us are doing most of the time.

Working smarter is dependent on deliberate practice. Progress depends on a commitment to improvement, to mindfully assessing what needs to change and remaining open to the challenge of external coaching/teaching.

And what’s often underappreciated is the immense satisfaction and joy that is generated from an investment in such practice. Learning to ‘love the grind’ may well be more useful than coveting the results.